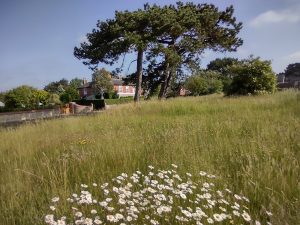 A large grass verge in the village of Westbourne is to become a haven for wildlife, after local residents offered to help look after it.

The area is now being cared for by Greening Westbourne, a local environmental group, as part of a West Sussex County Council scheme.

The area will no longer be mown at frequent intervals. Instead, WSCC will cut it only once a year, in late summer. Greening Westbourne will help wild flowers to flourish by removing the cuttings. It also hopes to restore a hedge.

A strip along the roadside will still be cut as before, to preserve sight lines for drivers.

The area, on the corner of Whitechimney Row and Old Farm Lane, is now a ‘community road verge’ – part of a WSCC scheme to encourage wild flowers, pollinators such as bees and other wildlife. Greening Westbourne applied for the area to be included in the scheme, at the suggestion of Chichester District Council. The project also has the backing of Westbourne Parish Council.

Greening Westbourne chair Richard Hitchcock said: “The area will look different, but it isn’t being neglected. It’s being carefully managed for the benefit of wildlife, especially bees and other pollinators, many of which are in decline. In time we hope to see many beautiful wild flowers flourish.

“Manicured grass verges aren’t very useful to wildlife. But wilder areas can provide vital food, shelter and nesting areas. I’m sure residents will appreciate a more natural look, and the value it will have for the environment.”

Cutting the grass late in the year means wild flowers can bloom for a longer period. By removing the cuttings, Greening Westbourne volunteers will be helping to ensure that the soil isn’t too fertile, enabling native wildflowers to thrive.

The verge is part of a ‘wildlife corridor’ proposed by Chichester District Council, which would help connect the South Downs National Park to the coast. 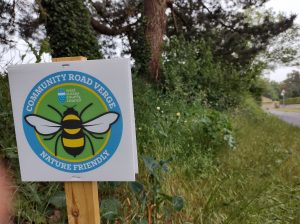 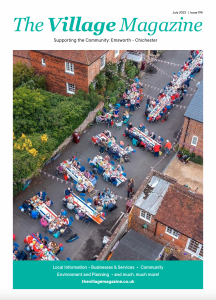