On Monday 27th January, Falcons Class from Thorney Island School had an amazing school trip to Gilbert White’s House, Oates Collection. The children were really excited to be going on this trip where they learnt all about the fateful expedition of Captains Scott and Oates who wanted to be the first explorers to reach the South Pole.

In the morning, the children learnt all about Antarctica and visited the museum which houses artefacts from the expedition. They handled some artefacts including husky dog reins and snow shoes. The bravest children tried the smell tins which included smells like penguin poo!

They then become mini David Attenboroughs learning all about different species of penguins and their adaptations before becoming wildlife artists by sketching them. They even got to feel real penguin feathers! “We really loved learning about how penguins survive in the freezing Antarctic,” explained Phoebe Holcroft.

The children handled and spoke about the rations the explorers would have taken with them before having their own lunch. They were not impressed with the amount the explorers had to eat.

After lunch, it was time to take on the role of an Antarctic explorer. They cosied down in to a real life explorer’s tent, tried on modern and old explorer clothes which were far too big, and even pulled their teacher and friends on a sledge.  “I liked pulling our teacher Mr Vokes on the sledge, it was really hard pulling everyone!” exclaimed Riley Reith Van-Beers excitedly.

The children really got a lot out of the day and asked some excellent questions which they will use in their learning at school. Some may even become explorers one day! 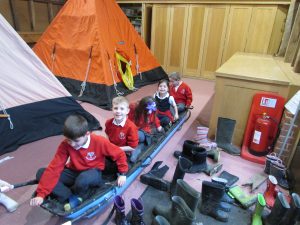