Stephen’s thoughts on Somerset past in the March magazine prompted some reminiscences of my own.

Somerset in the 80’s- perhaps not that long ago but it was one of those places that managed to retain much of its magic in small hamlets such as ours. Our smallholding, with its 16th Century farmhouse overlooking the Levels and lying on an ancient trackway, had resisted modern agricultural methods so that the fields were full of wild flowers and the orchard of traditional cider apples with such lovely names as Kingston Black, Pig’s Nose and Morgan Sweet.

Having been built when the Levels flooded even more than today, our house boasted a very large bedroom fireplace which, I came to learn, was probably for use when the household moved upstairs to avoid the rising water. Originally a hall house with a central open fire, one cannot help but wonder how the earlier occupants managed. Even today fields can flood to four feet or more.

The hamlet followed a line between the watery moorlands and the ridges that lay between them – the name Somerset possibly arising from the use of summer pastures – the very oldest houses at the foot of the hill, the later ones rising and falling on the peat as the land was drained over the centuries.

A kind of ‘Bermuda Triangle ‘existed between the major highways which, particularly during the summer, were busy with traffic rushing south toward the coast or west to Devon and Cornwall. Our rural backwater was a haven of peace and tranquility that carried on as if much of life, like the traffic, had passed it by. In an area of thatched houses, the old long straw of wheat was grown and this required special treatment: corn stooks in the fields were a common sight and it was not unusual to come across a threshing gang working an ancient machine in clouds of chaff – a sight straight out of Thomas Hardy.

On the major highways the odd pub had begun to modernise, knocking small rooms into large, characterless bars, but the local hostelries retained their individuality. It was always interesting to take a visitor into what appeared to be a cottage only to find that the flagstoned room was lined with barrels. We would have to wait for someone to identify themselves as ‘bar staff’ by asking what we would like (usually cider!) which you then had to take into another room to drink. In one instance it was ten minutes before the pleasantries and small-talk subsided and  it dawned on us that we had infiltrated a local club meeting that was taking place in our little room.

One winter night our first Parish Council meeting seemed  unusual even though we were beginning to realise that things were often different in this part of the world. Having had difficulty locating the venue in the dark, we arrived late, in the middle of an announcement of  the death of Oxo (or Bovril, I  forget which) and how this would affect the next meeting. When the hand bell ringers were announced as the entertainment for the break our puzzled enquiry revealed that we had, in fact, been part of the Agricultural Society, the Council were meeting next door. Oxo and Bovril, we learned, were the ox ploughing team….

We shared agricultural work with neighbours if needed – lambing, haymaking etc. and learned a lot as we did so. The hamlet had a number of, mostly farming, families that had lived there for generations like our immediate neighbours ,university educated sheep farmers with a young family and many relations locally.A quarter of a mile away a lone Scot entertained us from time to time with his bagpipes. Gossip aplenty came our way (our house being, as is common in those parts, on the roadside) especially at milking time. One nearby herd would make its way home for milking, followed eventually by the farmer with her bicycle. If we happened to be in our yard she would rest her elbows on the gate, followed by her ample bosom, and proceed, in a loud voice, to interrogate us about anything had come to her attention. This kindest of souls lived in what can only be described as an ‘original’ cottage, with an open hearth complete with its chimney crane.

She worked the farm with her brother, another character who, one frosty day whilst I was tiling a roof close to the road, stopped his tractor for a chat, I remarked that it must be cold out there on the moor, noting his glowing red face, hat pulled down over his watery eyes. ‘Oh no,’ he replied. lifting a gallon flagon from down by his feet, ‘Oi do ‘ave me zider’. It was rumoured that their father used to rely on his horse to get him home from his drinking sessions. Probably right – whereas we sold our two hundredweight of cider apples to the cider makers, our neighbour, I noted from the entry before ours when we booked them in, showed that his, measured in tons, were pressed only and the juice returned home.

They were good times when things were still simple and local: the cider maker, the abattoir, willow workers and a leather industry. The nearby small town private cinema wasn’t heated but if you were lucky the elderly proprietor’s cat would sit on your lap to keep you warm -a scary experience during some films!

Glastonbury spread its magic around: from the top of our land the autumn mists made the Tor appear to be rising from the lake of Avalon. The Festival was in its infancy, fortunately too far away to be heard but the Carnival was a magnificent spectacle and not to be missed. Always a bit ‘alternative’, on our last visit Glastonbury seemed to be populated by the same, now aged, hippies as when we first encountered them.

Although some things haven’t changed in that part of the world others definitely have. With the improvement of access, especially to London, art galleries and wine bars began to cater for parents visiting children at Public schools; the parents acquired weekend retreats and then bought up the old farms, not for the land but for the farmhouses. Mud covered lanes were an issue, livestock an irritation and sleepy Somerset began to feel the ‘civilising’ influence of the city bringing it slowly into the 21st Century. It will be interesting to see what changes in this lovely land in the coming years, hopefully it will be able to retain its rural charm despite everything. 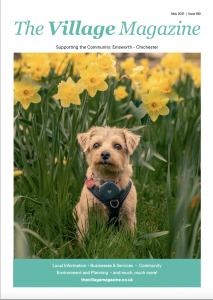