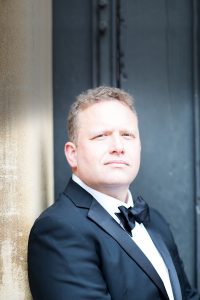 Peter Auty is established as one of Britain’s leading tenors but is probably best known for being the original voice in the Cartoon ‘The snowman’ singing ‘We’re walking in the air’. He made his professional debut at Opera North in 1998 and was a company principal of the Royal Opera House, Covent Garden from 1999 until 2002 where he covered several major roles and had the opportunity of working with many of the world’s leading conductors.

On the concert platform, Peter has worked with the London Symphony Orchestra (Sir Colin Davies), the Halle (Sir Mark Elder), and the London Philharmonic Orchestra (Neemi Jarvi, Vladimir Jurowsky) as well as performing all over Europe.

During the 2011 Proms season, he performed the tenor solo in Havergal Brian’s Symphony No.1 ‘The Gothic’ at the Royal Albert Hall with combined forces of over a 1000 musicians, now released on the Hyperion label.

Recently, Peter played the title role in the world premiere of ‘Pushkin’ at Grange Park Opera with the Novaya company from Moscow.

We are thrilled to welcome Peter and his wife to Stansted House this Christmas. The festive programme will include a selection of well-known tenor songs and arias, such as O Sole Mio, Funiculi, Funicula, La Mattinata, Sorrento, You Are My Heart’s Delight and Nessun Dorma as well as a feast of Christmas favourites – think White Christmas, O little Town, and O holy Night – and, of course, ‘We’re walking in the air’…

To find out more about Peter please visit his website at https://peterauty.com

Guests will enjoy a 45 minute performance in the private Chapel of St Paul followed by sparkling wine and canape reception in the Mansion House. The Main Hall and Music Room will be beautifully decorated with a large Christmas tree, garlands and twinkling lights to add to the festive atmosphere.

£30 per adult (Plus Eventbrite booking fees)