In a year of great uncertainty and changes in our daily lives that we didn’t expect to happen its been good to have our wonderful Harbour and AONB (Area of Outstanding Natural Beauty) always there for us.  The festive season is almost upon us and we can see nature’s festive baubles all around us in the hedgerows and along the shoreline – in particular the bright red hips of the dog rose and the deep red haws of the hawthorn.  Other rich coloured berries to spot are those of the holly (bright red) and spindle (rich pink and orange).  Other shrubs full of berries in the local gardens are the Amelanchier (snowy mespilus, which at this time of year looks rather similar to the hawthorn), cotoneaster and rowan.   Two other common shrubs produce tasty and plentiful black-coloured berries – the elderflower and the blackthorn but most of these are already picked or eaten by December – popular for hungry birds and mice, and humans too who think of sloe gin and elderberry wine!

By December most of the over-wintering birds have arrived in the Harbour.  Right now it is impressive to see the flocks of Brent Geese and hear them ‘gossiping’ as they roost on the water or fly overhead.

Some species of waterbird are caught by specialist teams and fixed with colour rings as we’ve mentioned before.  Our nearest group is called the Farlington Ringing Group but there are similar teams all around the world.  It means that we can spot individual birds by noting the colour rings on their legs and reporting the sightings.  Recently, Pete our ecologist saw a colour ringed-black tailed godwit in Nutbourne Bay.  He was able to look up the sightings and saw that this individual was first sighted in 2010 in Farlington Marshes in Langstone Harbour and that it breeds each summer in south-west Iceland in a place called Selfoss.

Over the years this godwit has been spotted back in Farlington Marshes and elsewhere in Langstone Harbour but also has been seen in other locations in Chichester Harbour as well as Nutbourne – in the Fishbourne Channel, off Chichester Marina, and off Northney. It has also been spotted in Pagham Harbour and at Pulborough Brooks.

One of the discoveries that this scheme has made is that we now know that some of the waterbirds may not stay in one location for the winter – they may fly to other places nearby  or may even return to the European mainland and come back again in the same winter.

Bird watchers who volunteer to help to collect data use a scheme of codes from the BTO (British Trust for Ornithology) which has a list of codes for all the species it records which can be seen here  https://www.bto.org/sites/default/files/u16/downloads/forms_instructions/bto_bird_species_codes.pdf  This tells us that the black tailed godwit is recorded as a ‘BW’.  But our individual is known as a c-r BW, the c-r standing for ‘colour-ringed’.  Next time you’re out on the shoreline take your binoculars and see if you can spot a colour-ringed bird.

We send all good wishes for the festive holidays – that we can stop and enjoy a moment of peace and goodwill with whatever arrangements we’ve opted for within the guidelines for this ‘Christmas like no other’.  We’ve recently come across a phrase noted by the author Jilly Cooper which we think will help in looking forward positively to the new year.  She cited William Wordsworth’s poem Tintern Abbey (1798) saying ‘Nature never did betray the heart that loved her’.  This reminds us that we know we can always turn to the Harbour for support – it is always there for us – to think about and visit when we can, to stop and stare, walk, sail and photograph – in our minds as well on our phones.  Happy holidays! 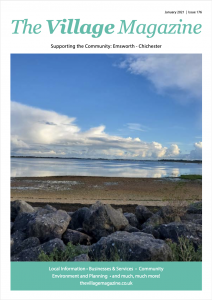